Nightingale singing opposite the Hayden Hide. Confirmed by sight as well as sound.
A previous report at the moorings on the 10th is also possible (A&P Miles) 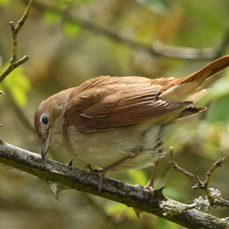 No nightingales yet, but many blackcaps and chiff chaffs singing. A whitethroat was heard in Rory's Wood (Sarahjane Williams). Common tern on Heronry North, two egrets in the heronry and swallows feeding over the dragonfly pond at 5 pm. Willow warbler singing in fishermen's car park.
A good day for raptors including buzzard, red kite, kestrel and sparrowhawk.

Speckled wood and orange tip butterflies on the Meadow Trail, but only one of each so far.