Neal Parkin Reports:
The highlights from this weekend surveys were:
Cuckoo – a male & female were seen flying together at both south and north end of the Pits.
Barn owl – few reports of barn owls this year but one was seen during the survey
Mistle thrush – an uncommon bird at Paxton so good to see some records
Kingfisher – pair seen on the river
Turtle dove – a bird heard purring in the Sanctuary by the ringers at 6:00
Jay – an uncommon bird caught by the ringers on Sunday
Red-crested pochard – these birds are usually absent over the summer months!
Avocet – pair at north end
Otter – caused the lesser black-backed gulls to become very agitated
Nightingales – 2 may be 3 birds singing. And better still another bird seen carrying food. 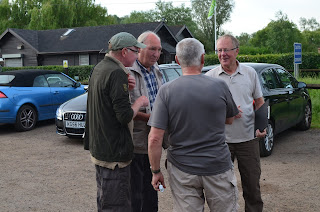 The fourth Paxton CES ringing session of the season was on an overcast and humid morning. Statistically the 4th CES session of the season is the quietest of the year. Since 2007 there have only been two catches of over 30 new birds. Our total of 24 new birds was about par for this visit and was dominated by recently fledged Blue Tits. Warblers were at a premium with singles of Blackcap, Chiffchaff and Reed Warbler, we expect to see fledged warblers appear over the next few sessions. Other notable species included the 3rd ever jay ringed on a CES ringing session and the first Bullfinch and Song Thrushes of the year.


June 20th: Just to mention that today I saw the following dragonflies on the Meadow Walk:

You have a wonderful place! Thank you for a great break from work!

June 22nd:  Full list will be Birdtracked.
Cuckoo, heard only, Kingfisher, Turtle Dove, 2 flew across the Sailing Lake at 16:45 approx.
Does anyone know what the Bees and Wasps are that are nesting on the banks of Hayling Lake?
Martin Bell, Merthyr Tydfil.

Summary:
The fifth Paxton CES ringing session of the season was on an a very pleasant summers morning. We were interested to see what effect (if any) the recent heavy rains may have had on nesting success. Our catch of 32 birds and 4 recaptures matched the average numbers seen on corresponding visits since 2007. After a successful year in 2018 the low numbers of Blackcaps caught to date this year is a little surprising. We were pleased to catch a newly fledged Whitethroat (a scarce bird around the Sanctuary area at Paxton) as well as young Garden Warblers, Wrens and Chiffchaffs. Five juvenile Treecreepers all caught in the same area throughout the morning was a record catch for this species on a single ringing session. Other notable species included the 18th Green Woodpecker ringed on a CES ringing session and the second Bullfinch and Song Thrushes of the year.
Ringers for this session were: Derek Gruar, Maureen Reeves, Andy Stanbury, Sara Miller and Saskia Wischnewski. Davy Reeves provided great help clearing vegetation from net rides. 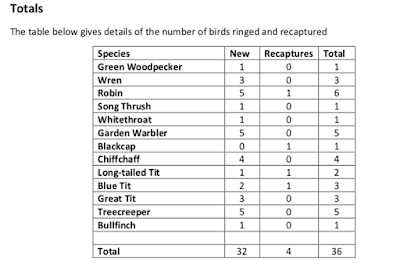 Summary:
The sixth Paxton CES ringing session of the season was on sunny morning the day after the hottest the day of the year. Bird activity was low first thing in the morning but picked up as the morning progressed. The catch was dominated by resident species, with the paucity of juvenile warblers again noticeable. After ringing a female Green Woodpecker on visit five, an adult male was ringed on this session. The first fledged Bullfinch of the year was another notable capture.
Ringers for this session were: Maureen Reeves, Andy Stanbury, Viv Ward, Chris Ward and Ken Griffin. 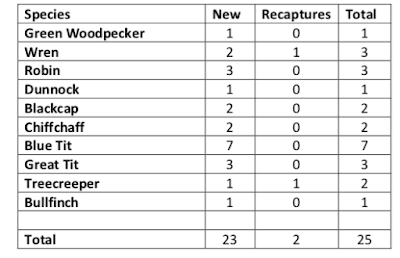 Recapture information
The two captures were birds ringed earlier in 2019.

Mid-season Review
The sixth session marks the mid-point of the CES ringing season and I was interested in comparing 2019 to other seasons. The table below gives the number of birds ringed and recaptured at the same point in all seasons from 2007. 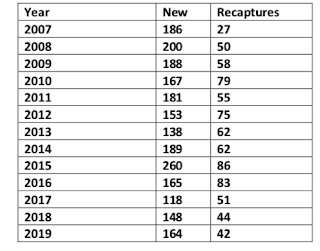 This season is slightly below the average total of 174 new birds for the mid-point over the past 13 years. It is noticeable that there is a decrease in the number of recaptures. There are a number of potential reasons for this, one may be a result of high mortality of adult birds during recent cold winters and the “beast from the East” storm.

The following table looks at the mid-point totals for nine warbler species we find at Paxton. At the CES mid-point we are 30% down on average since 2007. This may well be due to the poor survival of first broods during the prolonged wet spell in June. As many species are multi-brooded, numbers may well improve during the second half of the season.