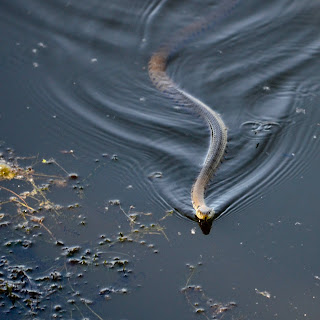 Grass snakes were seen by many visitors. This one was seen swimming across Heronry North lake.

In this period the variety of dragonflies and damselflies on the wing was spectacular, but no-one sent us their records. Norfolk and southern hawkers were on the wing, brown hawkers emerged, four spotted and scarce chasers were joined by black tailed skimmers and the first common darters. Emperors were the most dramatic fresh dragonflies followed by the first brown hawkers. Damsels included red-eyed, variable, common blue, blue tailed, small red and the spectacular, metallic banded demoiselles.

Plant-wise, the first great dodder was found at the river viewpoint and there was a spectacular show of bee and pyramidal orchids for those with the interest to seek them out.

Jocelyn Gale found a new record for the Reserve at the beach on Cloudy Pit in the form of hound's tongue. (It is still there but has gone to seed now.)

Anyone looking for spiders will not be disappointed, though no wasp spiders have been found yet.