3rd  Almost all of the egrets disappeared this week. Perhaps they are at
Grafham Water? (Actually I looked and they are not!)
A great spotted woodpecker was seen near the river viewpoint
along with a red kite, and redwings. 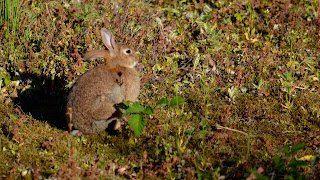 Have you noticed the lack of rabbits? They have all but disappeared locally
due to Rabbit Haemorrhagic Disease (RHD-2). This new disease affects hares too.
This is all bad news if you are a rabbit or a hare, but also if you are a fox, kite,
buzzard or other predator.

Rabbits have played a major role in habitat management here, for better or worse.
If they disappear I think the consequences will be mixed but the effect on
vegetation will be profound, unless they bounce back, which I believe they will.

4th  Another GS Woodpecker and a shrew at the Hayden Hide. Snipe x 2, green
sandpiper x 4, great white egret and little egret at the kingfisher Hide.

14th The first goosanders of the season, in the form of four young birds on the
Heronry Lakes.

21st On Wednesday we had a brilliant talk about Bees from Brian Eversham. I learned an awful lot. While the audience of fifty plus was assembling, I looked out the window to see a kingfisher perched on the edge of Weedy Pit. Migrant blackbirds and redwings were feeding on berries in the car park and I was tempted to sneak out for a better look. While I wasn't looking the following happened:
"Just after arriving this afternoon I spotted the GWE landing at the back of Weedy Pit. This seemed to drive out a Bittern which led to a “Face Off” for a minute or two. I took several pictures and have attached one for you."

25th Female Scaup from Kingfisher Hide, redwings, continental blackbirds and mixed
finches on arable. Redhead Smew in the quarry, plus 180 Golden Plover over.